Talking with one of the most knowledgeable experts in the typewriter industry, like Typewriters.com founder Jim Riegert, can lead to some interesting and surprising things. Like learning how many different industries still use typewriters — even in today's digital world.

From government agencies to banks and more, typewriters still play a crucial role in getting the job done.

In this week’s blog, we’ll take a look at some of those industries and what they use their typewriters for.

When you think of funeral parlors, typewriters may not typically come to mind, but these trusted machines are used to type official death certificates. This is because some states still require that death certificates be typed out.

In correctional facilities today, not only do their administrative offices use typewriters but suprisingly, prisoners are able to as well. It is common for inmates who are not allowed to use computers to use typewriters — offering a form of communication while also eliminating the likelihood of contraband.

A Market for Typewriters in Prison

For some prisoners, having a typewriter has made all the difference in providing a medium and an outlet for them. In an article in The New Yorker, several inmates were interviewed and shared what they use their typewriters for. One inmate used a typewriter as a way of capturing his feelings and events that he witnessed while in prison, while another inmate became a journalist while in prison, taking a writer’s workshop that was offered to prisoners. This led to him having his article published in The Atlantic. Another prisoner wrote a book and had articles published in Vice and the Daily Beast while he was still incarcerated. Click here to read their stories. 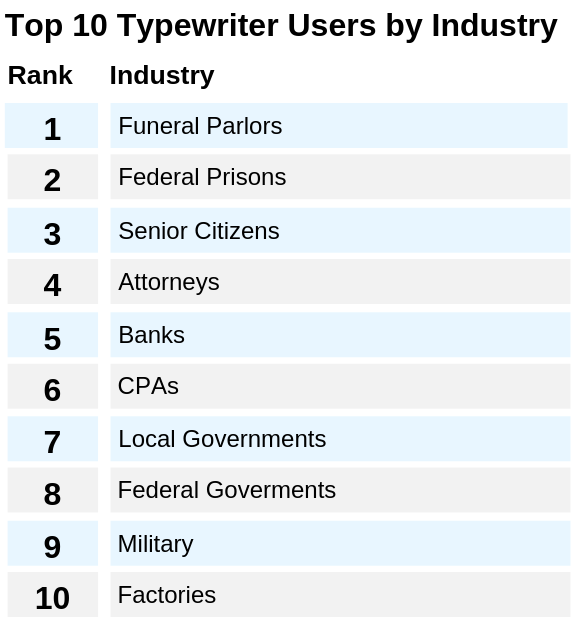 Typewriters are still a common tool amongst senior citizens who don’t want to use a computer. They may use their typewriters for typing routine letters, writing their congressmen and for creative writing. I had the pleasure of recently speaking to a playwright who told me that he still uses a typewriter to crank out his stories.

Typewriters can still be found in many law firms across the county. According to Lawyerist.com, any law firm more than 5 years old probably has at least one typewriter in the office. Typewriters are still used among lawyers and come in particularly handy when things need to be filled out in triplicate using carbon forms, filling out pre-printed forms or for smaller jobs like addressing envelopes.

Typewriters are a safe way to protect sensitive information, since digital data has the potential to be hacked. According to The Routledge Companion to Media Technology and Obsolescence published in 2018, "intelligence agencies and other sensitive governmental organizations use typewriters today for top-secret documents because typewritten text cannot be hacked as long as it exists purely as ink on paper."

Another interesting find from The Routledge Companion, was that the New York Police Department and 17 other New York City agencies still have over a thousand typewriters in use today!

Typewriters are also widely used among banks (used for producing certified checks), CPAs, the military and in factories. According to Jim Riegert, these segments mainly use typewriters for filling out forms, typing envelopes, and completing checks.

Many typewriters.com customers like the fact that they don't need to have WiFi and that they don't have to worry about being hacked and losing valuable data. They also like that they can complete their forms much faster, and can create content — all without distractions (since there's no virus updates or reminders).

It's easy to see why typewriters are the machine of choice for many businesses. We think we'll continue to see even more markets turn to them in the future, especially as more people look to limit distractions and increase defense against hackers.

If one thing is clear, typewriters are not disappearing any time soon.

Just ask Tom Hanks, who has successfully made using typewriters cool again among the younger generation.