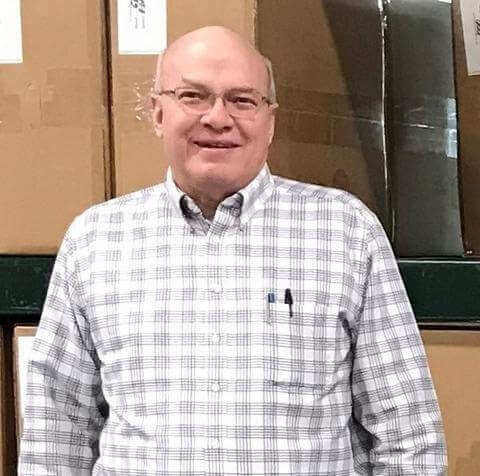 Typewriters.com founder Jim Riegert never dreamed of having a successful career in the typewriter business; he had very different plans growing up.

“I wanted to be a nuclear physicist and was enrolled as a physics major at Georgia Tech,” he recalls. But when life dealt Jim a different hand, he decided to pursue a full-time role in the typewriter business.

You could say that the typewriter business was in his blood; Jim’s father made a career as a service manager with IBM. What the younger Riegert remembers most about his childhood was moving. “My father was a service manager in six different cities, so with each promotion, we would move, until we finally settled down in Atlanta.

During this time, Jim says that typewriters were a very lucrative industry. Especially for IBM, where typewriters made up a large portion of its business. Prior to attending Georgia Tech, Jim took a part-time job with IBM as an installer when he was in high school. “As an installer, I would set up the typewriters and show customers how to use them. That's how I started out in this business.”

While studying at Georgia Tech, Jim worked part-time at IBM. “But my plans changed when I got a new manager, and he cut my hours back,” Jim recalls. “In that same week, the transmission went on my car. So, I decided not to pursue my studies and took a full-time position with IBM as a typewriter service technician, a position I held for two years.”

Jim then joined Progressive Methods, a company that specialized in the selling/repairing of office equipment, and where he would work for the next 40 years. Jim started out as a service technician, then four years later, worked his way up to VP. Eventually, he inherited the business from its previous owner, which he then ran for 15 years.

In 1985, Progressive Methods became one of the first (out of 700) authorized IBM typewriter dealers in the country to sell IBM’s Wheelwriter series. This was the first time that IBM had actual authorized dealers — IBM’s Selectric models were only sold direct.

According to Jim, IBM had lost a lot of its business during this time, which included its Selectric business, to companies like Brother, Panasonic and Xerox. That was when IBM came up with an electronic typewriter and introduced a dealer model that set up 700 authorized IBM typewriter dealers around the country. But in 2005, IBM discontinued the Wheelwriter series. (Jim continues to sell the IBM Lexmark Wheelwriter series on Typewriters.com)

If You Can’t Beat Them Join Them

In 1997, Jim says that he saw the decline in the typewriter business as the computer and laser printer industry grew in demand. “As the computer and laser printers got under $2,500, it really killed the typewriter as a word processing device. It just became a forms filling device and a niche market so we had to diversify our offerings, by selling and servicing items like printers, computers, fax machines, copiers, scanners, etc.”

As a result, he decided to try a different business model.

“We were getting hammered online at that point. That was the time that internet retail, was really starting to come about. So, I figured if you can't beat them, join them, and that’s when I bought Typewriters.com in 1997 for $4,000. I bought the URL, setup the website and started selling typewriters online.”

That was when business began to pick up. “I didn't really have any competition back then, so I kept our three technicians busy all day doing reconditioning work on IBM typewriters. Our online presence today continues to be just as successful as it was at that time.”

According to Jim, the business started out with 100 typewriters and today carries just under 2,000 different typewriters, along with a wide-variety of supplies in its 6,000-square-foot-facility in Tucker, Ga. This extensive product selection includes: IBM, Nakajima and Brother typewriters, along with the full-line of General Ribbon Company (GRC) typewriter supplies that includes nylon ribbons, correctable ribbons and lift-off tapes, as well as printwheels for major brands like IBM, Nakajima and Brother.

While competition is fierce today in the e-commerce sector, Typewriters.com continues to be an industry leader in the typewriter segment. The company has even grabbed the attention from one famous actor who just happens to have a passion for collecting vintage typewriters. We’ll reveal who this person is in a later entry.

Today, you can find Jim, working alongside his trusted technicians, who have been with Typewriters.com for over 14 years. As far as his plans for the future, Jim says he may retire in seven years, when he turns 75, but may decide to stay on longer. “I’ve enjoyed running successful small businesses and providing jobs for the people in our community over the years,” he concludes.

Jim welcomes calls from his thousands of customers around the world who have been loyal Typewriters.com customers. You can contact him at (404) 377-1884 or at info@typewriters.com