Living in Hawaii can pose its share of challenges, especially during hurricane season. That’s when Joyce Doty, the co-founder of Na 'Aina Kai (“Lands by the Sea”) Botanical Gardens & Sculpture Park/Kilohana Farms and Hardwood Plantation in Kilauea, Hawaii, located on the north shore of Kaua’i, relies on her trusty Olympia manual typewriter, says Marty Fernandes, the garden’s horticulturist who has worked at Na 'Aina Kai since 1995.

“Joyce Doty, my 90-year-old boss, is a very big fan of typewriters. She continues to use her Olympia typewriter for when we have a hurricane and there’s no electricity, which has happened twice since she and her late husband, Ed Doty, have lived on Kaua’i. 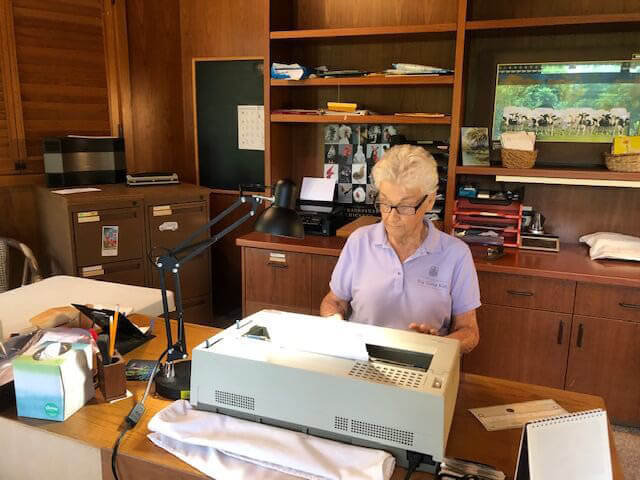 “We had a great typewriter repair guy on our island who quit working on Selectric typewriters, prompting Mrs. Doty to get her first Wheelwriter 1500. He retired about three years ago, leaving the island without a typewriter repair service. That's when we found Jim Riegert at Typewriters.com and his wizard repair skills.”

Fernandes says that Doty sent three of her Lexmark Wheelwriter 1500s to Typewriters.com (one of which she purchased from Typewriters.com) for repair so that they could be used in the different offices at Na 'Aina Kai Gardens.

One of those three IBM Wheelwriter 1500 typewriters sits in Fernandes’ office. Since using the machine, Fernandes says that she really likes how easy the machine is to use.

“In many cases, it is so much easier to slip a form into the typewriter and fill it out than to try to do it online. The staff uses the three typewriters to fill out garden shipping labels and incident reports. Volunteers also use them to fill out their information sheets.” 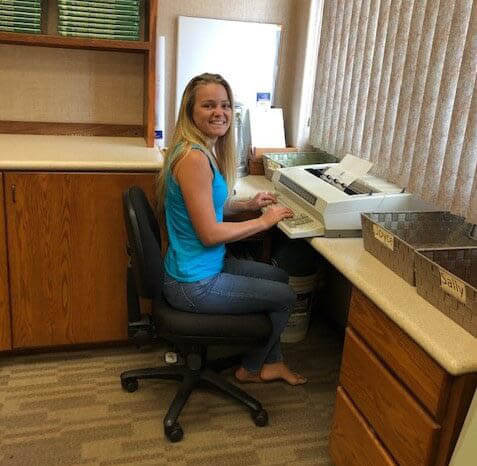 While Doty still uses her computer, she prefers to use her typewriter for all of her bookkeeping. “She keeps ledgers and fills the pages out on the typewriter. She also does all of her correspondence on the typewriter and would still rather send an actual card through the mail than send notes via email or ecards.”

Fernandes says that Doty also loves using her typewriter because nothing ever disappears while she's writing. “Sometimes when she's working on a letter or a document on her computer, she'll hit something and then the whole thing will disappear. She says that never happens with her typewriter!”

Always There to Answer Any Typewriter-related Questions

Fernandes pointed out a time when Riegert went above and beyond in helping her fix an issue that occurred during shipping. He walked her through the step-by-step process of how to put the piece back into place.

“Jim is amazing! The first typewriter returned to us had had a hard time during its lengthy shipping, so I sent Jim an email telling him what I thought was wrong. Right away, he gave me two possible problems and how to fix them. I tried, but it didn't work so I called him, and he told me to just do what I was doing but to push harder and that there would be a big thump and it would be fixed. I did what Jim said and it worked just like he told me it would!”

Living Her Dream in Paradise

Speaking with Fernandes, it’s hard not to feel that passion for her work come through, even 24 years later. Since joining Na 'Aina Kai, Fernandes says she has worn many hats — as horticulturist, administrative assistant, librarian, volunteer guide trainer, guidebook creator and Joyce Doty's personal assistant.

“When I was getting my Bachelors in Horticulture at the University of Arkansas, a bunch of students were talking about what our dream job would be,” recalls Fernandes. “I said I wanted to be the estate horticulturist at some amazing place, which everyone thought was just too far out there to happen. Not only is that the job that I got, but I got it in the most beautiful place in the world, working for the nicest folks ever.”

Fernandes and her husband were the first people to ever get married in the gardens, and the Doty's liked him so much that they hired him as the mechanic soon after the wedding.

“The Doty's built us a house on the property in 1997, and since then, we live/caretake/work and have been involved in the development of the gardens,” she explains.

Fernandes says that a few months after she started, the Dotys decided that they didn't have enough work to do, so they bought 169 acres — 110 of which Marty and her husband used to plant tropical hardwood trees.

"I have also been able to grow a hardwood forest (from seed), which in the future, can be harvested and the wood sold and used to support garden projects! I have the most amazing job on the planet!” 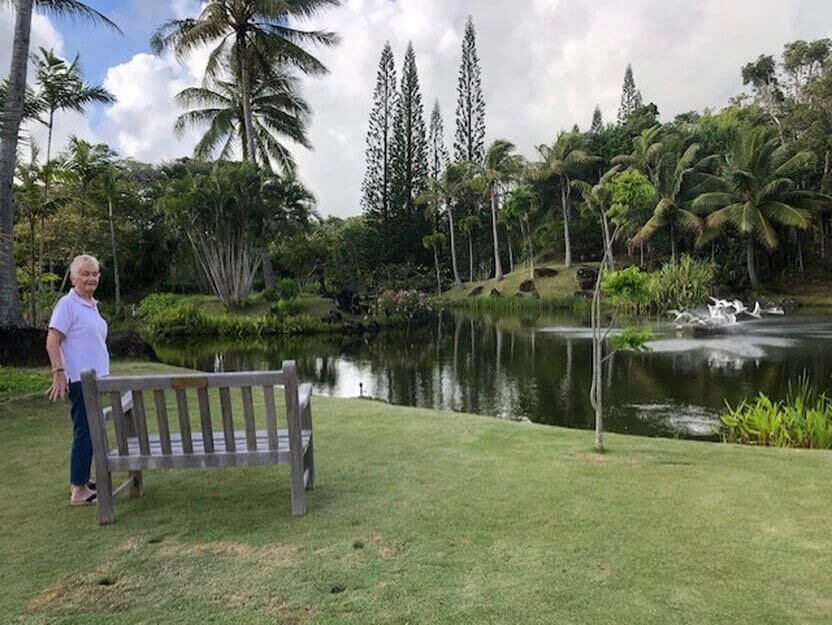 Joyce Doty standing by the 3/4 acre, 1.6 million gallon lagoon she created from a flat cattle pasture 30 years ago!

The story of how Na 'Aina Kai was founded is truly a unique story in itself. What started out as a passion for gardening grew into something more, way beyond the dreams of its founders Joyce Doty, and her late husband, Ed Doty.

Joyce Doty, along with Ed Doty, who was a professional contractor, retired to Kaua’i from their ranch in Northern California in 1982. With a true pioneer spirit, the Dotys, upon moving into their new residence, lived there without electricity for six weeks.

The Dotys had planned on splitting their time at their Northern California ranch and Kaua’i, but decided to make Kaua’i their permanent residence.

They initially bought 30 acres of land and started creating and kept buying land. They created the 240-acre gardens from an empty cattle pasture and previous pineapple/sugar cane fields.

Joyce Doty has contributed to most of the design planning of the gardens, like the Poinciana Maze, International Desert Garden, the Navajo Compound, along with many of the other designs at Na 'Aina Kai.

In 1995, Marty Fernandes was hired and became an important part of the Na 'Aina Kai team. Over the next four years, Fernandes and the rest of the staff would be hard at work planting approximately 60,000 hardwood trees that would be harvested to help provide funding for the garden.

In 2000, the Dotys decided this was a little more than "backyard landscaping" and they created the not-for-profit Na 'Aina Kai Botanical Gardens and Sculpture Park and donated all the land/buildings/sculptures to the organization. They set up a board (Joyce Doty is still a member) to run it and a trust to sustain the gardens. The garden opened to the public in 2000. 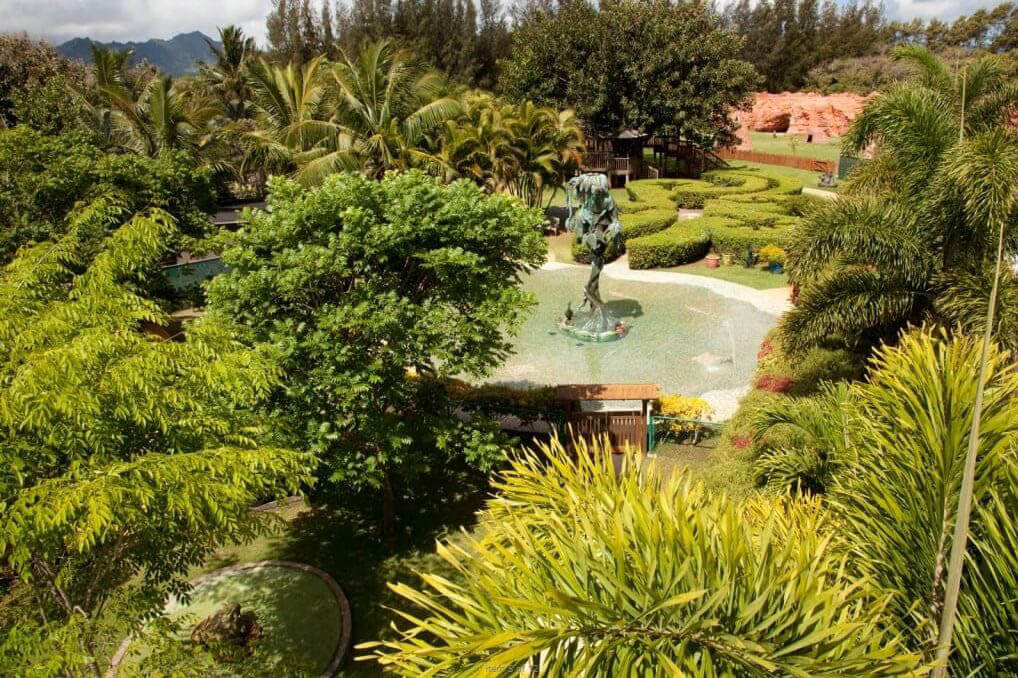 "We never planned to create a garden. It just happened when we bought this large area of farmland (and while lying in my bed at night where all ideas are born!)," Joyce Doty concludes." I decided what we are going to do with this place. This garden could not have happened without my husband who was a very competent and creative contractor, and my very talented Horticulturist, Marty Fernandes.”

A mix of culture, beauty and art is what visitors can expect when they visit this unique landscape — a Japanese teahouse, a Desert Garden, a Palm Garden, a Navajo Village and an Athabascan Village, are just a few of the diverse displays visitors will see at Na 'Aina Kai.

The gardens are open for guided tours. Visit the Na 'Aina Kai website  at: www.naainakai.org